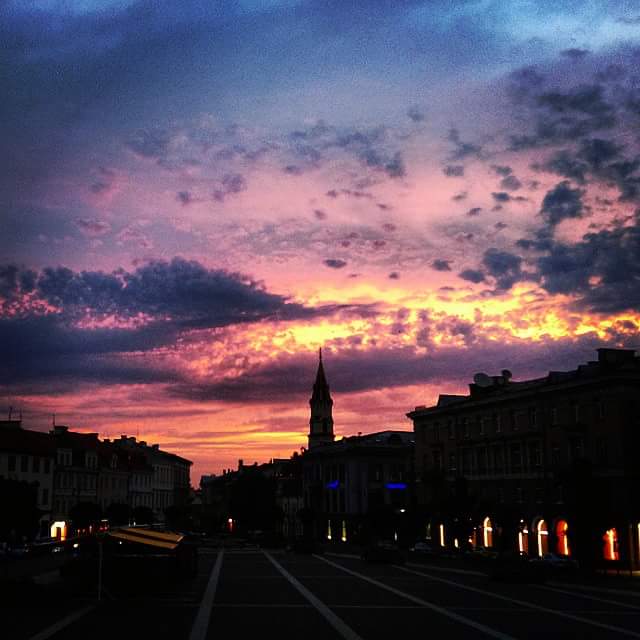 Without the tourist numbers of the other Baltic capitals, Vilnius locals have been provided with the breathing space to form their own nightlife, defined by its homegrown aesthetic and sound.

There are many facets that fit together to form a city’s nightlife and Vilnius is no exception. From transformed Soviet industrial spaces, Minimal Mondays, disused train station platforms, workers palaces, Funktion-One Sound systems and a lot of ambient lighting – here’s my pick of where to head out in Vilnius after dark.

Anyone arriving in Vilnius by train can’t help but notice the giant statue of Tony Soprano in his dressing gown, surveying the tracks from a far side of the station. On the same platform you’ll find Peronas. Occupying an old station building, its terrace spills out over the former platform, providing a spot to chill and observe the pulse of the station.

Whilst the interior has a rough warm, spacious aesthetic to it, this changes when they host a night, with the floor-space filling up. On the weekend its got the perfect location for settling in and having a few, before heading to Kablys round the corner.

Kablys is an imposing Soviet architectural relic that’s been repurposed as an indoor skatepark, hostel, restaurant/cafe and club amongst other things. This former workers palace, turned multi-purpose cultural space, is named after the massive hook that adorns the neoclassical facade.

The interior is a blend of contemporary minimalist features and faded Soviet neoclassical extravagance . It’s host to a variety of different nights – ranging from all night full on techno or DnB raves, to concert style events. The interior space is used in different ways depending on what’s demanded, so there’s a fresh set-up for big nights.

If your heads suffering from the night before or you’re just in the mood to properly relax with friends, Bukowksi‘s got you covered. Its tight courtyard is perfect for summer evenings and in the warmer months there’s a constant vibrant vibe late throughout the week.

Heading inside there’s a warm, laid back atmosphere, with spacious seating. It’s one of the most popular pubs outside of the Old Town and has a solid reputation locally. There’s a mix of local and premium international beers on tap, plus a gourmet hot-dog menu if you’re after some munch.

Found on Islandijos street in the Old Town, Opium holds the best house and techno nights in town. You enter through a popular Asian fusion restaurant  – Briusly – then head on upstairs where it’s fitted with a Funktion-One Sound system and some seriously sexy lighting.

There’s a strong representation of local artists and labels, mixed in with major international names. Nights to look out for include Smala, the Jagerblowouts and Silence Nights. They shut up shop for the mid-summer months, so make the most of the weekends they’re open.

Nestled in a vine-covered courtyard in the midst of the Old Town, Vasaros Terasa plays host to Minimal Mondays. This is a weekly night that runs through the summer months, offering minimal house and techno that perfectly suits this relaxed summer space.

It’s a popular night and despite the unconvential courtyard’s size, finding seating is competitive. Meanwhile the corner space in front of the speakers is usually rammed with people till the early summer sun signals close. Minimal Mondays migrates to Kablys when the seasons closed, though not on weekly intervals. Vasaros Terasa holds many different nights throughout the week and it’s always worth taking a look at whats on, especially as its packed up once the summers over.

Around the corner from Vasaros Terasa you’ll find Distilerija, a great contemporary cocktail bar.The inteior aesthetic is provided by flawless furnishings, whilst the drinks selection is inspirational. It’s the perfect setting for some after dinner drinks or settling in at the start of a night . With its central location its busy throughout the week and you’ll find a fair amount of fellow foreigners here, drawn in by the huge back-lit bar.

Meanwhile, hidden away down an old town side street, Misterija is the late place you can rely any day of the week. As a shots bar, their speciality is providing you with obscene trays of shots, bombs and hand grenade variations at equally obscene times in the mornings. If you’re feeling particularly ambitious have a crack at the 80% Stroh.

Loftas is an old Soviet industrial area that’s been transformed into a performance space. It’s a vast complex and is made up of surrounding lanes, offices, warehouses and basements. It plays host to a variety of different events, with the spaces utilised in different ways depending on the night. The main performance space is a renovated warehouse, used for concerts and raves where you’ll major international names performing.

If you’re after a taste of the music you’ll find in Vilnius – have a look at the Lates Spaces soundcloud.